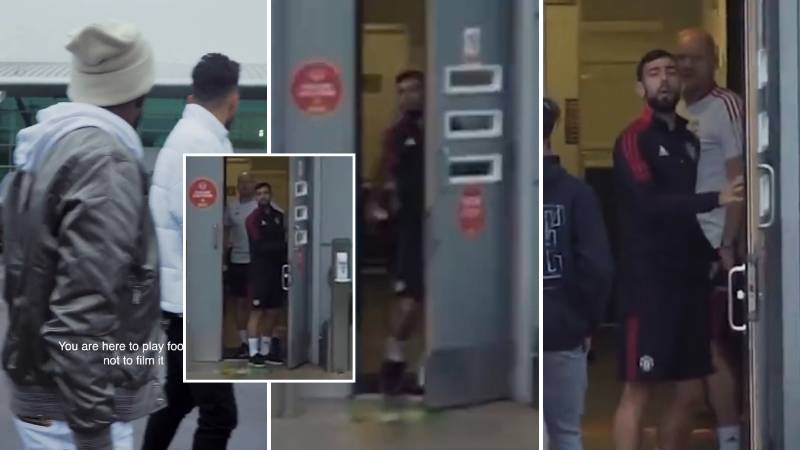 The footage emerged on social media and showed Fernandes shouting at United’s Brazilian duo, midfielder Fred and full back Alex Telles, who were doing some filming outside the club’s training facilities.

Fernandes spotted the duo and shouted: “Stop being such ‘ballers’!”

He added: “You are here to play football, not film it!”

After an exchange of expletives between Fernandes, Fred and Telles, the Portuguese said: “Film my d**k.”

As it turns out, it was just friendly banter between team mates as Telles was filming with Brazilian football marketing agency, O Clube Football. The full back was filming a ‘A day in the life’ video which gives fans behind the scenes access to Telles’ day from start to finish.

The exchange with Fernandes happened as Telles arrived to training with Fred.

One fan tweeted: “Nobody needed this summer vacation more desperately than Bruno. He needs to recharge, seems to be really stressed out Lolol”

Another said: “Lol why did this just make my entire day, Love Bruno”

Telles joined the Old Trafford club from Portuguese side Porto in 2020 in a deal worth a reported £15.4 million. He was initially brought in to ultimately displace Luke Shaw but the Englishman found his best form after Telles arrived, the Brazilian only got game time when Shaw was out injured.

To date, Telles has made a total of 50 appearances for the Red Devils, scoring once. With his only goal coming in the Champions League against Villarreal in September last year.

Telles along with his United team mates will be hoping to put the past behind them as they prepare for the new era under the leadership of Erik ten Hag.

The Dutch manager has a huge job to do and will need all the players to buy into his philosophy in order for him to bring the glory days back to the club.

Fans are expecting the club to be busy in the summer transfer window, after a series of outgoings that included the likes of Paul Pogba, Jesse Lingard and Juan Mata, the Old Trafford faithful will be expecting top quality signings that will allow the team to challenge the likes of Manchester City and Liverpool at the top.