Three immersive artworks have been unveiled on London’s Southbank, depicting an Ethiopian refugee’s journey to safety in the UK.

The three-dimensional pieces depict the story of Eskander Turki, who is now a member of the Northern Ireland athletics team.

The street art, created by the duo known as 3D Joe & Max, tells how Mr Turki, who fled his home in Ethiopia, sought refuge in the UK and found healing through running.

Mr Turki said: “Ten years ago I could not imagine the life I have today.

“The support and community I have found in the UK, through Migrant Help and in my running, have helped me to heal from the trauma of my past.

“I was forced to run from my home and leave my family behind in Ethiopia, fearing for my life and searching for safety.

“Now, my running has saved me in many more ways. I have found new hope for my future – starting a family with my wife Amina, following a new career path, and racing for the Northern Ireland team.” 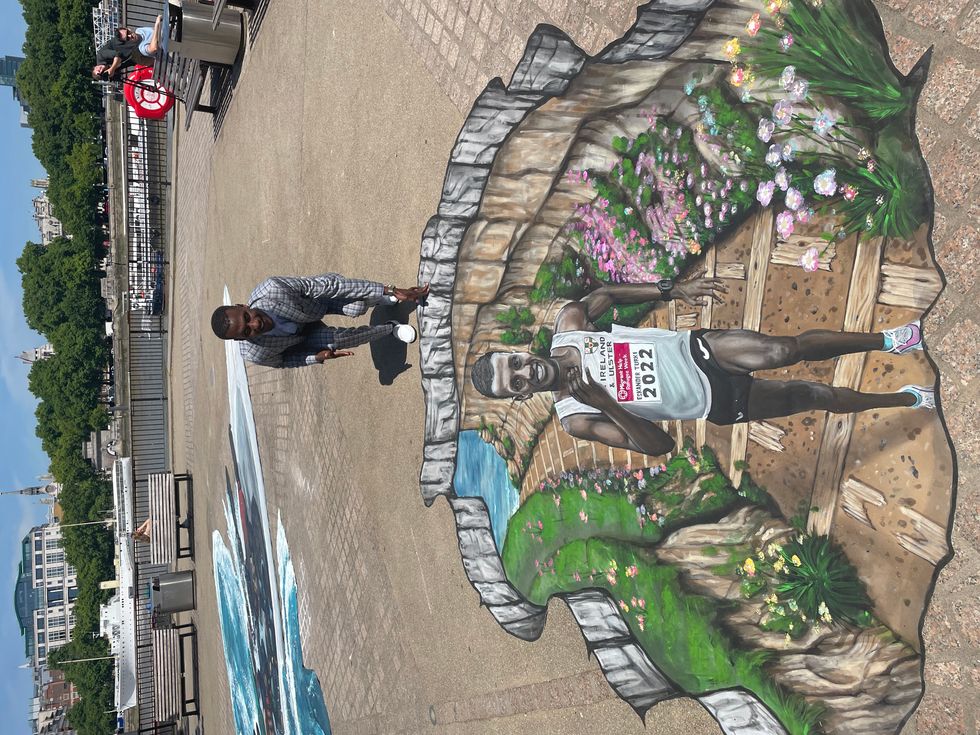 The street art, created by 3D Joe and Max, tells the story of how Ethiopian Eskander Turki sought refuge in the UK and found healing through running (Migrant Help/PA)

There are three artworks, representing the three stages of Mr Turki’s journey, as part of a campaign by Migrant Help to mark Refugee Week 2022.

The immersive style invites viewers to literally step into the frame, allowing people to place themselves in the different chapters of Mr Turki’s story.

The first piece depicts him escaping violence and persecution in Ethiopia, the second shows his journey across the Mediterranean in a dinghy, and the third illustrates him claiming asylum and settling in Northern Ireland, where he took up long-distance running.

Mr Turki left Ethiopia in 2011 after being imprisoned and tortured for four months for taking part in a student protest while studying electrical engineering at college.

His mother sold her possessions to raise money for him to escape to Sudan, fearing he would end up like his father and brother, who were both killed by the military.

However, what followed was a decade of abuse during which he was enslaved on a Sudanese building site, was imprisoned by people smugglers in Libya, escaped across the Mediterranean in a dinghy, and was assaulted and left homeless in Italy.

He finally settled in Belfast, in April 2019, and it was there that a doctor suggested he took up running as a way to manage his trauma. He did so, and went on to earn a place in the Northern Ireland and Ulster athletics team earlier this year.

In August he will make his track debut in the Northern Ireland championships and in the Antrim Coast half marathon as part of the elite field, which will see him compete against some of the world’s top runners including Sir Mo Farah.

Joe Hill, of 3D Joe & Max, said: “When I heard Eskander’s story, I was blown away. The journey he has been on is unfathomable to those of us who haven’t been faced with such danger.

“Through the anamorphic artworks I’ve created, my aim has been to convey the emotion of the moments depicted, moments that many refugees experience in their own way – be that fear, hope or loneliness.

“The scenes I create are never whole until people interact with them though, and the purpose of these pieces is to allow the public to see themselves in Eskander’s experiences, to really connect with what he’s been through and celebrate the life he’s built.”