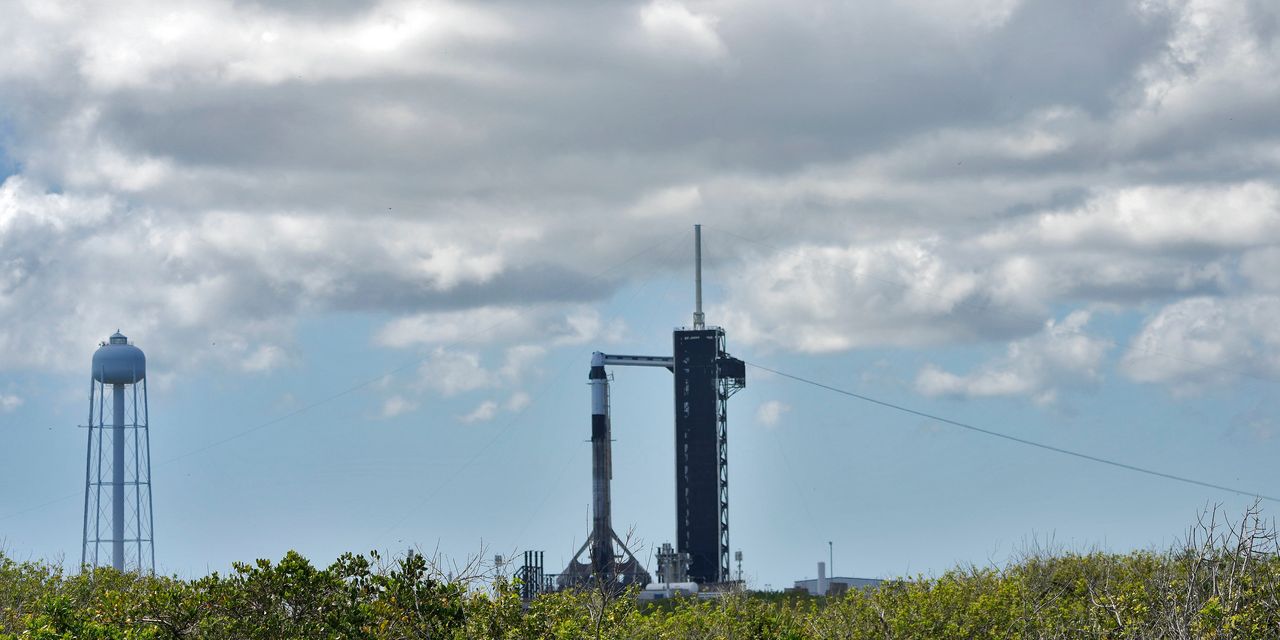 A Space Exploration Technologies Corp. Falcon 9 rocket with a Crew Dragon spacecraft stacked on top of it launched from Kennedy Space Center in Florida to the orbiting research facility, according to a company live stream.

The flight Wednesday is the fifth time SpaceX has launched astronauts to the space station for the National Aeronautics and Space Administration and is roughly two years after the company conducted the first human spaceflight from the U.S. since NASA’s last shuttle mission in 2011. In February, NASA said it agreed to purchase three more crewed flights from SpaceX, bringing the total value of its contract with the company to $3.5 billion.

SpaceX, which has focused on developing reusable space vehicles, said Tuesday that it was using a new crew vessel for the latest flight and a Falcon 9 booster tapped three other times. The booster is meant to land on a ship in the Atlantic Ocean, the company said.

The four will conduct scientific research after they arrive at the space station, including an investigation into developing artificial human retinas, officials said. Four astronauts who traveled to the facility with SpaceX in November will return to Earth on a company craft following a roughly five-day handover, NASA program manager

said during a briefing.

SpaceX has opened up its combination Falcon 9 and Crew Dragon vehicle for private-astronaut missions, such as a flight last year funded by the billionaire technology entrepreneur

and a recent mission for Axiom Space Inc., a Houston-based company that is developing a private space station and arranging trips to the International Space Station.

On Monday, the four private astronauts on an Axiom mission returned to Earth on a Crew Dragon, splashing down in the Atlantic Ocean near Jacksonville, Fla., after weather-related delays contributed to a longer-than-expected stay aboard the station for them. NASA would like to have about two all-private missions visit the facility a year, as part of an agency push to stimulate more commercial activities in the lower parts of Earth orbit, officials from the space agency have said.

senior director of human spaceflight programs at SpaceX, said Monday at a briefing that it was important for the company to fly “customers like Axiom, especially when they’re doing these great, important things to expand humanity in space, which of course is our core mission.”

Twitter, meanwhile, said Monday that it would accept Mr. Musk’s bid to purchase it in a deal valued at $44 billion. Should the transaction be completed, Mr. Musk will balance his time making changes at the social-media company, leading SpaceX and expanding

He is also working on other ventures.

Hawthorne, Calif.-based SpaceX has set a busy pace for itself. Last month Mr. Musk said in a tweet that SpaceX was aiming for 60 Falcon launches in 2022, roughly double the number of Falcon 9 launches in 2021. The company also operates the Falcon Heavy rocket.

How do you think Elon Musk should juggle his commitments to SpaceX, Tesla and Twitter? Join the conversation below.

Many of the launches this year will likely be to loft satellites to orbit for Starlink, SpaceX’s internet service. In addition, the company is planning to start launching satellites for the British satellite-broadband company OneWeb in 2022 and to conduct a private-astronaut flight with Mr. Isaacman, retired Air Force Lt. Col. Scott Poteet and two SpaceX employees. That mission could occur toward the end of the year.

SpaceX has sought to begin a broader campaign of test launches of its rocket Starship from a company site in southern Texas, along the Gulf of Mexico. The company has been developing the enormous vehicle, which is meant to be fully and quickly reusable, in part for deep-space missions. In February, Mr. Musk said the company had made progress on the vehicle’s engines, adding power to them while lowering cost, but was still working on the reusability goals for Starship.

To move forward with the test program, SpaceX needs to obtain permissions from the Federal Aviation Administration, the regulator for commercial space launches in the U.S. The FAA has been conducting an environmental review of the company’s plans for Starship and is currently slated to release a final assessment of the project on April 29. The FAA has delayed releasing that report in the past.

SpaceX could potentially use a site at the Kennedy Space Center in Florida to test Starship, Mr. Musk has said.

Write to Micah Maidenberg at micah.maidenberg@wsj.com