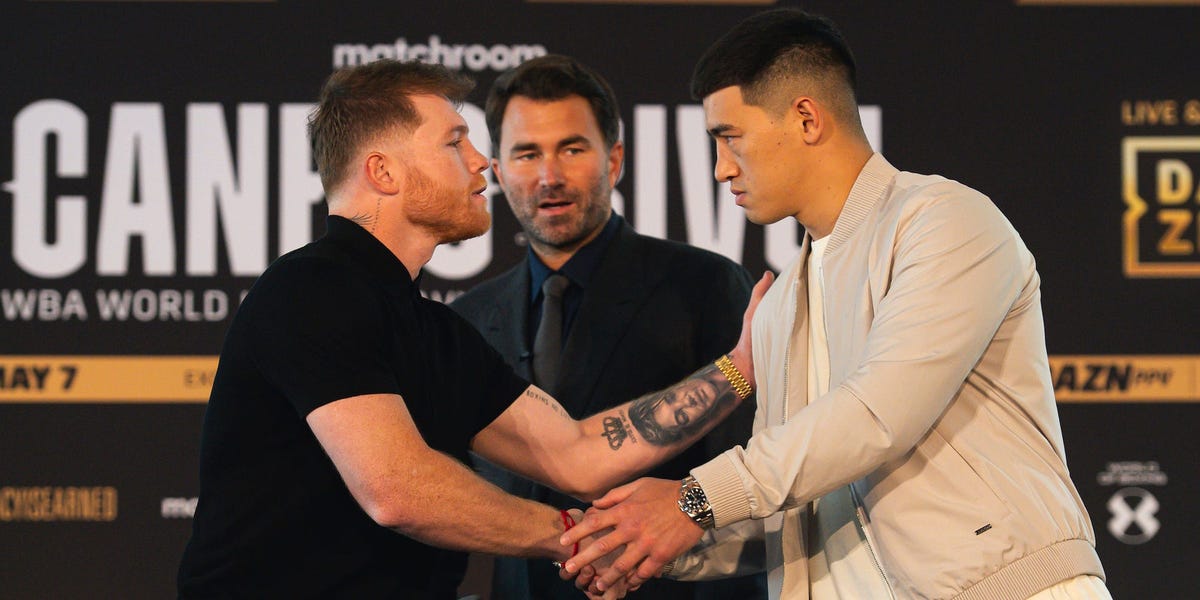 LAS VEGAS — Eddie Hearn expressed doubts to Insider this week that his firm Matchroom will retain Saul “Canelo” Alvarez on its roster after the expiration of their three-fight deal this year.

Alvarez returns to the ring Saturday as he challenges Dmitry Bivol for the Russian’s WBA light heavyweight world boxing championship at the T-Mobile Arena in Las Vegas.

It will be the four-weight world champion fighter’s 61st professional bout but, at 31, he still has at least five years of prizefighting ahead of him, he told Insider and other reporters this week.

Speaking to Insider, Alvarez’s promoter Hearn — the chairman of Matchroom — confirmed that his company will organize the Mexican boxer’s entire year.

Beyond that, though, it’s unclear how much involvement Hearn and Matchroom will have in Canelo’s future — if any at all.

“You’ll see that fight if he beats Bivol,” he said.

“Really, they needed to both win for that fight. Triple G’s done it now” by beating Ryota Murata, Hearn said, adding: “If Canelo does it, I think you’ll see that fight in September.”

A third opponent later this year is not as clear. It could be a fight against the winner of a light heavyweight fight between Joshua Buatsi and Craig Richards this month, or it could be against super middleweight John Ryder.

“They want me to do one in December in Mexico or London,” Hearn said. “I think the next move for Canelo is to actually start breaking some legacy boundaries in terms of where you fight.

Hearn and Canelo have made numerous public displays of affection through the months they’ve worked together.

Insider asked if that bonding will be key in retaining Canelo beyond this year, considering the fighter might have to move to other management, promotional, or broadcasting companies if he pursues fights against Jermall Charlo and David Benavidez.

“I don’t think he’ll go beyond the three-fight deal,” Hearn told us. “And I think that’s fine.

“We believe in him, we have a great relationship and I think, you know, he’s gonna make sure that he works with whoever he wants to work with but also in the fights he wants to be in.

“I think that’s the great thing about the flexibility of this position is he can literally go and fight who he wants on whatever platform he wants, but we know we have these next three fights locked in.”