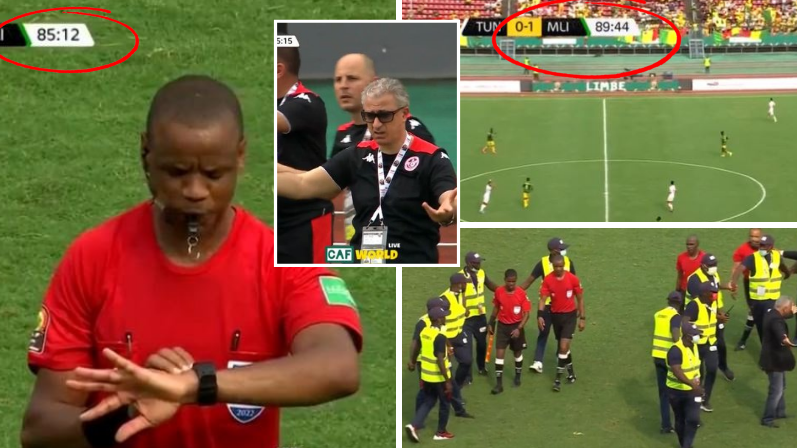 Tunisia’s match against Mali at the Africa Cup of Nations ended in chaotic scenes on Wednesday after the referee prematurely blew for full-time twice – including FIVE minutes before the end of regulation time.
Mali won 1-0 thanks to a first-half goal from Ibrahima Kone, but that barely tells the story of a crazy match, which featured two controversial penalties, a red card and a series of bizarre refereeing decisions.

Mali were awarded a penalty in the 48th minute when Tunisia’s Ellyes Skhiri was judged to have blocked a shot with his arm, with Kone stepping up to score on his tournament debut.

Tunisia were given the chance to equalise from the penalty spot in the 75th minute following a VAR review, after Southampton’s Moussa Djenepo was deemed to have handled the ball.

The referee blows the whistle before the 90 minutes are up…

Things then took a bizarre turn when Zambian referee Janny Sikazwe blew his whistle for full-time after only 85 minutes.

Both sets of players looked totally baffled as Sikazwe pointed towards the tunnel before realising his error.

He was asked to review the tackle by VAR and checked on the pitchside screen, before staying with his decision.

Tunisia pushed for an equaliser against the 10 men but were left frustrated when Zikazwe blew for full-time with 10 seconds remaining in the 90 minutes.

Tunisia’s players were clearly incensed by his decision to not add on any extra time, despite the numerous stoppages in the match.

Zikazwe required protection from security after the full-time whistle, as Tunisia’s head coach Mondher Kebaier angrily remonstrated with the officials on the pitch.

Both sets of players eventually returned to their respective dressing rooms but the drama was far from over.

The coach is beside himself

Officials from African football’s governing body, CAF, interrupted the post-match news conferences to state that the match would need to resume, with three minutes of extra-time to be played.

“CAF officials barged in and are saying that the match will be re-started to play out the final three minutes. The coach is beside himself.”

Mali’s players initially refused to return to the pitch before eventually being persuaded.

But in farcical scenes, Tunisia’s players failed to show up, with Mali eventually being awarded a 1-0 victory.

Piano partners with Snowflake to activate customer data at scale

Twitch Streamer Accidentally Blocks All of Their Followers